I have reprinted the following Arnold Palmer Tip to highlight his opinion of the importance of the STRAIGHT LEADING ARM in the back swing.      GOLFSTR+ was developed to help you with your straight arm, flat wrist and to know your limitation in your limited or  “Compact Back Swing”.

On September 10, Arnold Palmer celebrated his 84th birthday.  He is generally regarded as one of the greatest players in the history of men’s professional golf. He has won numerous events on both the PGA Tour and Champions Tour, dating back to 1955.  Jack Nichlaus, Gary Player and Arnold Palmer played in an era where they had to depend on their swing and less on the equipment.  Today’s equipment just exaggerates your swing mistakes so you should pay attention to the old masters of golf. 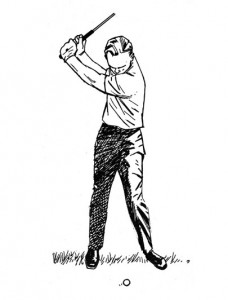 Limit your back swing and keep your leading arm straight for more consistent hits and Keep Arnie Happy.

TIP PUBLISHED By ARNOLD IN HIS PRIME
“Try to keep the club under control at all times, especially at the top of the backswing. Each of us has physical limits. We can take the club back just so far. You’ve got to keep the backswing compact and well within your natural capabilities. Because the minute you’re stretching yourself as you swing back, the minute you’re fighting the weight of the club instead of remaining easily in control of it, you’ve swung too far.   When you go too far, one of two things happens: You bend your left elbow, or the grip gets loose in your hands. Either way, you’re lost.”

WHAT ARNOLD THINKS TODAY
“Long and loose is still a bad idea. There aren’t very many good players like John Daly. “

GOLFSTR+ is not just a passing fad.  The all-time greats like Ben Hogan and Arnold Palmer understood the benefit of the Straight Leading Arm in the Back Swing.  If you have a serious interest in improving your game, why not SWING LIKE A PRO.

GOLFSTR+ gives you 5 training aids: Straight Arm Back Swing, Flat Wrist in Putting and Chipping and in the Back Swing and also a Wrist Lag Trainer for more distance.

CLICK TO check it out and pass this on to your friends.

Not everyone can rotate their body as well as young professional golfers but there is hope.

Aging bodies end up with lower back and spine problems so you may have started to bend your elbow in the back-swing to compensate.  Big MISTAKE!  Bending your leading arm elbow is only creating more mishits, pulls and slices. 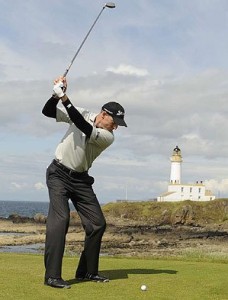 Jim Furyk with Straight Leading Arm and Wrist Hinge near the top of his limited back-swing.

The good news is that most of the head speed in your club is generated by the release of you wrist hinge as you swing through the impact zone.  If your hip and spine rotation is limited, just limit your back-swing and let wrist lag take care of the distance.

Sweeping your club head in a wide arc to force rotation in your back-swing along with a straight leading arm are ideal.  You want some rotation of the hips and spine but make sure that you keep your wrist flat while you hinge to create a 90 degree lag in the back-swing.  [Cock your wrist to create a 90 degree angle from your forearm to your club shaft.]  Pull down on your straight leading arm and release your relaxed wrists with a whipping action at the bottom of your swing.

Jim Furyk may have a wild looking back-swing and the shortest driving stats on the Pro Tour but his wrist release and swing from the inside sure do produce straight shots.

REMEMBER:  the longest drive should not be your #1 goal.  Hit’em straight and keep’em in the fairway to lower your score.  It may help you shoot a round of 59 someday.

Of course GOLFSTR+ is a great solution to help you train for straight leading arm, flat wrist and lag in the back-swing.  Try it!  You’ll like it!  CLICK HERE to learn more!

GOLFSTR+   For Every Swing in your Game

We have now created a new video to show you an improved way to use GOLFSTR+.    Golf Professionals and our customers have been suggesting these changes for a softer feel on the back of the wrist.   We have already introduced GOLFSTR+ with the new Black Rubber EXTENDER for increased pressure when using GOLFSTR to remind you to keep your LEADING ARM STRAIGHT in the back-swing.

We now realize that for all 4 of the other uses for GOLFSTR+  you should be flipping the plastic plate over so that the curved tip is pointing UP.  Mounting the curved edges and the curved tip UP will give you a more comfortable fit on your wrist.

We are no longer recommending that you mount the curved end over your knuckles for PUTTING and CHIPPING.  Assembling the curved tip in the UP direction helps to fit all sizes of wrist and hands.

The same applies for FLAT WRIST in the BACK SWING.  By mounting with the edges and curved tip pointing up it is much easier to hold the wrist flat while hinging the wrist to lag your club in the down swing.  With this setup GOLFSTR+ just slides over the back of your flat wrist on your gloved hand during the back-swing and down-swing.

If you own a GOLFSTR+, why not try these new mounting methods today.  If you don’t own one, don’t be left behind.  Buy one today and CLICK HERE to Improve Every Swing in Your Game.

GOLFSTR LOVERS: Earn $10 for Each Referral

2/   BUY AN EXTRA ARM BAND FOR A SIZE OR COLOR CHANGE:  If you want an extra arm band in either size or color, just enter the coupon code:   arm band       when you place an order for the size and color that you want on our website www.golfstr.com.   Your order will be discounted by the listed price of  GOLFSTR+.  You will only be charged the shipping and handling fee of $10 .

Your comments and GOLFSTR+ usage ideas are always appreciated.  Please enter them at the bottom of this message or enter a message at the bottom of our website  Contact Page  https://golfstr.com/contact/

Weekend Warriors: Get Back in the Game!

That famous quote by Ben Hogan is so true: “The most important shot is your next one.”  Learn from the past and move one.  This is easier said than done but your game will never improve if you don’t develop the right mind set and confidence.  GOLF TIPS MAGAZINE recently provided a great summary of the 5 Mental Mistakes in Golf.  So use your MENTAL CADDY to help you avoid dumb mistakes?

1/ Getting Distracted: Let your mind slow down and dump all of the clutter from outside of your game (emails, to do list, your last poor shot, that annoying bird >>> ) 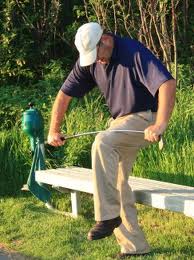 3/ Reacting to Poor Shots:  We all react in different ways when we screw up a shot.  The harder you get on yourself the longer the impact and worse the effect on your next shot.  You came to play this game so don’t waste the time stewing about it.

4/ Lack of Course Management:  If you mishit your ball into a poor location just chalk it up as a penalty and hit your ball back into an area when you have a clear shot.  Don’t expect that you can hit like Phil or Tiger to save your butt 9 out of 10 times.  Odds are you will only end up in a worse position.

5/ Losing Confidence:  If you make a poor shot, try to understand what went wrong and get over it.  Negative self-talk is not going to help you.

So get on top of your game.  Build confidence in your game by practicing or warm up with GOLFSTR+.  Get the feel for great shots and use that feeling when you get out on the course.  Straight leading arm and straight wrist shots will give you better results.

We all make mistakes but don’t make 2 in a row.  Keep your mind focused and you will drop strokes in every round that you play.