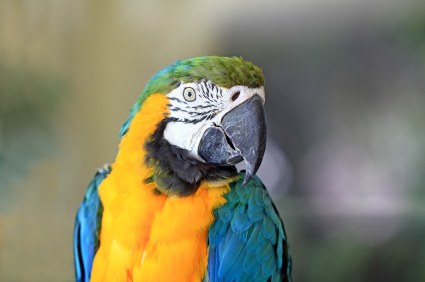 I found a stray parrot on my patio this morning.

All he says is “Good morning, you old fart!  You suck at golf”.

Four old-timers were playing their weekly game of golf, and one remarked how nice it would be to wake up on Christmas morning, roll out of bed and without an argument, go directly to the golf course, meet his buddies, and play a round.  His buddies all chimed in and said, “Let’s do it! We’ll make it a priority, figure out a way and meet here early Christmas morning.”

Months later, Christmas morning arrives, and they were all on the golf course.

The first guy says, “Boy, this game cost me a fortune! I bought my wife such a big diamond ring that she can’t take her eyes off it”.

Number 2 guy says, “My wife is at home planning the cruise I gave her. She was up to her eyeballs in brochures.”

Number 3 guy says, “Well, my wife is at home admiring her new car, reading the manual.”

They all turned to the last guy in the group who is staring at them like they all had lost their minds. “I can’t believe you all went to such an expense for this golf game. I woke up, slapped my wife on the butt and said: “Well Babe, Merry Christmas! It’s a great morning for either sex or golf, and she said, “Take a sweater”.

A husband and wife are on the 9th green when suddenly she collapses from a heart attack!
“Help me dear,” she groans to her husband.
The husband calls 911 on his mobile, talks for a few minutes,
picks up his putter, and lines up his putt. His wife raises her head off the green and stares at him. “I’m dying here and you’re putting?”

A young man and a priest are playing together.
At a short par-3 the priest asks, “What are you going to use on this hole, my son?” The young man says, “An 8-iron, father.
How about you?” The priest says, “I’m going to hit a soft seven and pray.”

The young man hits his 8-iron and puts the ball on the green. The priest tops his 7-iron and dribbles the ball out a few yards.
The young man says, “I don’t know about you, father, but in my church, when we pray, we keep our head down.”

He teed off on the first hole, a par four, and blistered a drive 300 yards
down the middle of the fairway.

Upon reaching the ball, the husband said to his wife, “Just hit it toward
the green, anywhere around there will be fine.”

The wife proceeded to shank the ball deep into the woods.
Undaunted, the husband said “That’s OK, Sweetheart” and spent the full five minutes looking
for the ball. He found it just in time, but in a horrible position.
He played the shot of his life to get the ball within two feet of the hole.
He told his wife to knock the ball in.

His wife then proceeded to knock the ball off the green and into a bunker.
Still maintaining composure, the husband summoned all of his skill and holed
the shot from the bunker.

He took the ball out of the hole and while walking off the green, put his
arm around his wife and calmly said, “Honey, that was a bogey five
And that’s OK, but I think we can do better on the next hole”.

To which she replied, “Listen asshole, don’t bitch at me,
only 2 of those 5 shots were mine.”

Golf brings out the love in us all !

A golfer teed up his ball on the first tee, took a mighty swing and hit his ball into a clump of trees.
He found his ball and saw an opening between 2 trees he thought he could hit through.
Taking out his 3-wood, he took a mighty swing.
The ball hit a tree, bounced back, hit him in the forehead and killed him.

The bride was escorted down the aisle and when she reached the altar, the groom was standing there with his golf bag and clubs
at his side. She said: “What are your golf clubs doing here?” He looked her right in the eye and said, “This isn’t going to take all
day, is it?”
—————————– 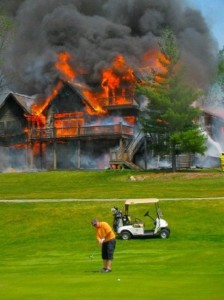 It was later reported that his wife got out safely, and that he did indeed par the hole …. he says the divorce isn’t going to be that bad, now that there’s no house involved!!!…

CLICK FOR Really funny video about a new line of golf balls:  “Range”

Picture a room full of pregnant women with their husbands.

The nurse says, “Ladies, remember that exercise is good for you. Walking is especially beneficial.  It strengthens the pelvic muscles and will make delivery that much easier.  Just pace yourself, make plenty of stops and try to stay on a soft surface like grass or a path.”

“Gentlemen, remember — you’re both in this together. It wouldn’t hurt you to go walking with her. In fact, that shared experience would be good for you both.”

The room becomes very quiet as the men absorb this information. After a few moments a man, name unknown, at the back of the room slowly raises his hand.

“I was just wondering if it would be all right if she carries a golf bag while we walk.”

Brings a tear to your eye, doesn’t it? That kind of sensitivity just can’t be taught!!

My boss phoned me today. He said “Is everything OK at the office?”

I said “It is all under control. It’s been a very busy day. I haven’t stopped to take a break all day.”

“Pick up the pace a little. I’m in the foursome behind you.”

Is there SEX after Death?

A couple made a deal that whoever died first would come back and inform the other if there was sex after death. Their biggest fear was that there was no after-life at all.   After a long life together, the husband was the first to die.

True to his word, he made the first contact:

“Well, I get up in the morning, I have sex. I have breakfast and then it’s off to the golf course. I have sex again, bathe in the warm sun and then have sex a couple of more times. Then I have lunch (you’d be proud – lots of greens).  Another romp around the golf course, then pretty much have sex the rest of the afternoon. After supper, it’s back to golf course again.  Then it’s more sex until late at night. I catch some much-needed sleep and then the next day it starts all over again”

The obit editor informs her that there is a charge of 50 cents per word.

She pauses, reflects, and then she says, “Well, then, let it read, ‘Angus McPherson died’.”

Amused at the woman’s thrift, the editor tells her that there is a seven word minimum for all obituaries.

She thinks it over and in a few seconds says, “In that case, let it read…….

Irishman on a Desert Island

One day an Irishman, who has been stranded on a desert island for over ten long years, sees an unusual speck on the horizon.

“It’s certainly not a ship,” he thinks to himself. As the speck gets closer and closer, he begins to rule out the possibilities of a small boat, then even a raft.

She approaches the stunned man and says to him, “Tell me how long has it been since you’ve had a cigarette?”

With that, she reaches over and unzips a waterproof pocket on her left sleeve and pulls out a pack of fresh cigarettes. He takes one, lights it, takes a long drag and says, “Faith and begorah! Is that good!”

“And how long has it been since you’ve had a sip of good Irish Whiskey?” she asks him.

She reaches over, unzips her right sleeve, pulls out a flask and hands it to him. He opens the flask, takes a long swig and says, “Tis absolutely fantastic!”

At this point she starts slowly unzipping the long zipper that runs down the front of her wet suit, looks at the man and asks, “And how long has it been since you’ve played around?”

With tears in his eyes, the man falls to his knees and sobs, “Oh, Sweet Jesus! Don’t tell me you’ve got golf clubs in there too.”

When I die, bury me on the golf course, so my husband will visit.

For All You Avid Golfers:

I don’t say my golf game is bad, but if I grew tomatoes they’d come up sliced.

I’ve spent most of my life golfing. The rest I’ve just wasted.

They call it golf because all the other four-letter words were taken.

The ardent golfer would play Mount Everest if somebody would put a flag stick on top.

Golf is played by twenty million mature American men whose wives think they are out having fun.

It took me seventeen years to get three thousand hits in baseball. I did it in one afternoon on the golf course.

Golf is a game in which you yell “fore,” shoot six, and write down five.

Give me golf clubs, fresh air & a beautiful partner, and you can keep the clubs and the fresh air.

Have you ever noticed what golf spells backwards?

The only time my prayers are never answered is on the golf course.

inclined to do, and you will probably come very close to having a perfect golf swing.

Go play golf. Go to the golf course. Hit the ball. Find the ball. Repeat until the ball is in the hole. Have fun. The end.

If you think it’s hard to meet new people, try picking up the wrong golf ball.

It’s good sportsmanship to not pick up lost golf balls while they are still rolling.

Don’t play too much golf.. Two rounds a day are plenty.

Golf is a game in which one endeavours to control a ball with implements ill adapted for the purpose.

A golfer’s diet: live on greens as much as possible.

Gone golfin’ … be back about dark thirty.

Born to golf. Forced to work.

My body is here, but my mind has already teed off .

May thy ball lie in green pastures …. and not in still waters.

The difference in golf and government is that in golf you can’t improve your lie.

Golf is a game invented by the same people who think music comes out of bagpipes.

During his physical examination, a doctor asked a man
about his physical activity level.  He described a typical day this way:
“Well, yesterday afternoon, I took a five hour walk about 7km through some  pretty rough terrain. I waded along the edge of a lake.
I pushed my way through brambles.
I got sand in my shoes and my eyes.
I just avoided standing on a large snake.
I climbed several rocky hills.
I took a few ‘leaks’ behind some big trees.
The mental stress of it all left me shattered.
At the end of it all I drank eight beers.”
Inspired by the story, the doctor said,
“You must be one hell of an outdoors man!”