Is Chipping Your Game Killer ?

Have you ever kept track of the number of times that you have to make a chip during a round of golf?    Weekend Warriors don’t hit a lot of Greens In Regulation but they lose a lot more strokes “missing” a chip or chipping outside of 5 feet and end up with a 2 or 3 putt hole.  Fortunately Chipping is the easiest stroke to fix with the right coaching.  I saw Peter Jacobsen, a PGA Pro promoting a Cleveland Wedge where he offered this simple tip.

Your 2 to 20 yard wedge shot is NOT a full body swing shot.  You actually make this shot with a limited spread of your feet (as balance is not an issue with a light swing) and with an open stance to ensure that you keep your weight forward on your leading leg as you swing directly up your target line.   There is no need for weight shift as the weight of your club is doing all the work.  You are basically swinging your arms (like a pendulum) hanging from the right side of your chest (for right handed clubs).  There is very little weight transfer in a chip.  You want to hit the ball before you skim the grass so you need to setup with the ball directly opposite the inside of your trailing heal.

Pressure forward, backswing enough to let your club do the work and follow through with your hips

1/ Line up your chip and move close to your ball to make a few practice swings.

4/ Your swing direction should be directly up your target line.

You will never be a great chipper unless you practice with each of your preferred chipping clubs to learn the distance that each amount of swing will make your ball fly and roll-out.  The higher the loft, the shorter the roll-out.  Practice with your GOLFSTR+ on your trailing arm to limit wrist lag in your backswing as you make your pendulum swing with your arms.  Buy one today at www.golfstr.com

I was pleased to find a Golf-Info-Guide blog about the different swing required for a driver as compared to any other fairway club. The driver has a limited face angle as it is designed for you to hit up on the ball off a tee. Your fairway woods are designed for a level surface swing and irons are designed for a downward impact with the ball before taking any divot. YOU SHOULDN’T BE USING THE SAME SWING FOR EVERY CLUB.

I don’t recall seeing pros make a very clear distinction between the swings for each type of club. If you don’t treat your driver and fairway clubs as 3 different swings you will never be a low handicap golfer. This fact woke me up to the reason why so many golfers swing every club as if it is a driver. They swing and fall back on there fairway clubs.They never learned the benefit of shifting their weight forward during the swing for their fairway clubs (woods, hybrids and irons).

NUMBER ONE PROBLEM FOR POOR GOLFERS: They try to hit every shot with a driver swing and have never learned to swing through fairway club shots or down through iron shots]. 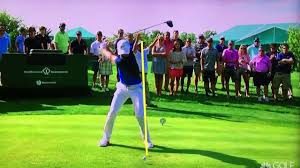 Rory McIlroy, Voted top Golfer of 2019 keeps his left ear behind the ball when he nails a driver.  [Click the image for SloMo video]

Driver Swing
It’s the only swing where you setup with the ball in-line with the heel of you leading foot and keep your leading ear behind the ball throughout your swing. Yes, there is still weight transfer from your trailing foot to your leading foot during the driver swing but never so much as that your head shifts over your ball the way it does for an iron shot. Your driver must impact your ball after the bottom of your swing arc to create a launch angle and minimize under spin. 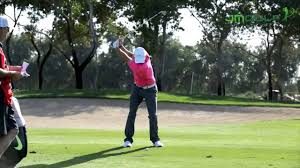 Rory getting his body through the ball as he impacts his iron. His left ear passes his ball at the top of his swing [Click image for SloMo video]

Fairway Wood and Hybrid Swing
These clubs all have wide flat souls. They are designed to sweep through the ball WITHOUT TAKING TURF after the ball. The loft of the face of the club is the only angle needed to release your ball at that angle into the air. Keeping the ball closer to your leading heel will allow for a higher launch but if you shift your weight to your leading foot before impact you may find that you are driving the ball into the ground or skimming the ground. Let you club do the work without cutting into the ground.

Iron Swing
These clubs have a narrow soul and are designed to hit down into the ball before the leading edge of the club takes a divot. Your weight shift to your leading leg is critical to ensure that you complete a proper swing and impact with the ground.

Practice with GOLFSTR+ for 6 swing solutions and lower your scores. Buy one today at www.GOLFSTR.com

What is the main reason why we fail to make perfect shots out of the sand trap? Sand condition, slope of the sand, distance of your hit and height of the trap lip are all variables that you are trying to overcome. They all affect your decision for the amount of power and loft needed during your swing. RUSHING your swing speed is the killer for every sand shot. Club acceleration to a full follow-through makes all the difference.

Because your shoulders, arms, wrists, hips and spine are all moving during every swing, if we slow down or speed up a swing, we lose our sequencing rhythm. Yes, we forget to move our hips or transfer our weight and end up hitting fat or thin shots. Consistency of the motion of our swing in the sand trap is our #1 killer. We are focused on longer or shorter shots from the sand when we SHOULD BE FOCUSING on the amount of backswing and FULL follow-through with an accelerating swing speed. 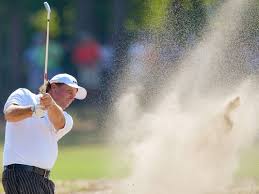 Make a full follow-though with your swing and throw that sand.

Ensuring Sand Trap Consistency
Knowing the right setup is a critical starting point but you will never be consistently successful unless your complete both a backswing and a full follow-through to finish the shot. You have to think about your complete swing. Make sure that you pound down under the sand and take at least 3 inches of sand after your ball with your follow-through. Yes, make sure that you are throwing a club full of sand with your ball. Focus on lifting an imaginary quarter sitting in the sand after your ball. “Take the quarter” and finish your follow through.

Setup:
1/ Take an open stance and open your club face so that it’s parallel with the sand (pointing up to the sky).
2/ Put pressure on your leading foot so that your nose stays over your ball in the center of your stance with your grip pointed at your bellybutton. [Do this forward pressure because most of you will never transfer your weight to your leading foot during your sand trap shots.] 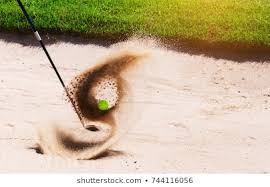 Lift your ball on a carpet of sand. [Pretty cool photo.]

3/ Take a wider stance or dig your feet down into the sand for stability and to ensure that your swing will slide under the sand beneath your ball to lift it on a carpet of sand. /

Is Your 60% Swing Killing Your Approach Shots?

What is a best swing solution?  Taking a full speed swing with an 8 iron or a slower swing using a 6 iron at 60% of your swing speed?   Both can be the right answer depending on the situation but there is a problem that you have to overcome.  If most of your shots are made with your full speed swing, how do you properly GEAR DOWN to hit a three quarter speed or half speed or quarter speed swing without leaving your club face open or closed and hitting your shot well wide of your target?

You may not realize that when you slow down your swing, your hips, shoulders, arms and hands should be firing at the same consistent rate as your full swing.  When just one part of your body gets out of sync you can’t help but leave your club face open or closed.  That’s why you may notice that the pros seem to swing all of their clubs at about the same speed until they are too close to the green.  That’s also why pros use up to 4 different pitching wedges? 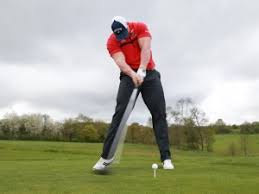 Swing Speed is generated by whipping your wrist release while your arms rotate at 85%.

Solution to Maintain a Full Swing:

Pros know when they are hitting a distance that is between clubs.  They have to either back off on their speed risking a mishit or they adjust their club.  They want to keep their “normal” swing speed AND RHYTHM, so they choke down on clubs for less distance and swing at their normal 85% speed.

Solution to Adjust for a Partial Swing Speed:

Pros like Jason Day hit up to 600 balls a day on non-tournament days.  They need the extra practice time to consistently release their hips, shoulders, arms and hands for each speed that they need to hit each club for a variety of distances while keeping the same sequence and rhythm for each of their body parts.  YOU DON’T HAVE THE PRACTICE TIME THAT THE PROS DO so don’t expect that you can achieve a variable swing the way they can swing.

If you have to slow down your swing to hit a shorter distances, practice hitting with a slightly open stance and more pressure on your leading foot to help you reach your normal impact position.  Just focus on finishing your swing from the inside and straight up your target line.

“Ball Beating” at the driving range is crazy for the Weekend Warrior.  Practice different shots.  Learn to hit a few draws, a few fades, a few full swing and half swing shots with many of your clubs.  Seve Ballesteros learned to play every shot with 1 club when he was a young boy.  That’s a great example for all of us.  Practice with GOLFSTR+.  It’s a great training aid to learn 6 swing solutions with a controlled swing speed.  Buy one today at www.GOLFSTR.com