Hallelujah Moment: Don’t Freeze up in the Back-Swing

When I really want to hit an important shot (especially when I want to avoid hitting out of bounds to the right) I often tighten-up, rush the back-swing and end up spraying my shot to the right (even with a straight arm back-swing).  Hallelujah, I finally discovered that I was rushing my back-swing and limiting the rotation of my shoulders and spine.

BINGO!   Slow down, loosen the grip and take time for the shoulder rotation, back-swing and wrist hinge. 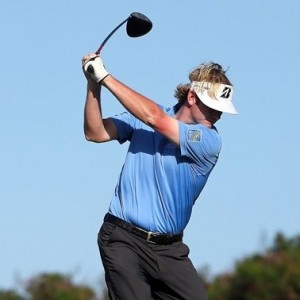 Straight arm in the back swing is so important but if you don’t rotate your shoulders and spine you will never swing from the inside or finish in a single plane down the target line.  SO DON’T RUSH THE BACK SWING.  Let it happen.

Brent Snedeker showed beautiful form as he won the Canadian Open just 600 yards from where I am writing this Swing Tip.  I could feel the vibes.

Recurring themes in blogs that I received over the past week:

GOLFSTR+ helps you train for wrist hinge, flat wrist and straight leading arm in the back-swing but it’s all wasted if you rush the back-swing and forget to rotate your spine & shoulders; swing from the inside and swing up the target line.  That is how I found my Hallelujah Moment for consistent hits.   You will be amazed.

Set your goal to break 100 or 90 or 80 on your next round.  Keep your mind focused and don’t freeze up before you complete your back-swing with a nice straight leading arm and flat wrist.

The Right Grip is Key to your Successful Swing

Recreational players often grab a club like a baseball bat.  It’s the first club that they ever grabbed so it feels natural to hold it in your palm (not your fingers).  But it is not helping in your swing, tempo, arm muscles and game.  This week a number of pros commented on the right grip, the right pressure and the right speed to get the results that you want.

Don Trahan discussed the importance of gripping in the fingers not the palm.  Holding the grip in the palm or the fleshy base of your hand will cause strain all the way up your arm.  It will cause strained muscles in your arm and elbow if you grab it too tightly.

A doctor commented in the Trahan blog: “For someone with frequent elbow soreness they may be gripping the club too tight”.  He recommended thicker grips to help anyone with elbow issues. 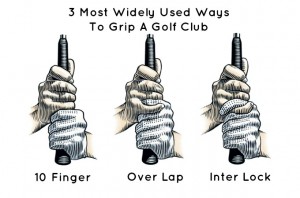 Holding the grip in your palm also gives you less flexibility when you hinge your wrist for lag.

“A light grip will calm the nerves and slow down your swing and give you control.”

In a recent interview, one of the contestants in a Longest Drive event said: You can’t develop lag with a tight grip.  He also suggested that the driver head needs to impact in the center of the face, with an ascending blow on the inside of the center line of the ball (swinging from the inside). 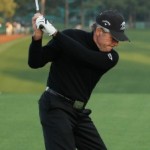 Gary Player talked about a 3 knuckle grip to hit further.  When you are ready to swing make sure that you can see the 3 knuckles on you glove hand (leading hand) to avoid slicing the ball (the primary problem for the recreational golfer).  This actually forces you to swing from the inside and up the target line.

Gary Player also advised that a light grip does not mean that you allow the club to release from your fingers at the top of the swing.  “You must own the club.  Your grip has to be complete throughout the swing.”

Another blog reported:  To hit longer drives you must have relaxed hands for a fast release through impact.  Most golfers who want longer drives grip the club waaaaay too HARD!

So use a relaxed but complete grip in the fingers of both hands so that you can see 3 knuckles on your glove hand.  Practice with GOLFSTR+ to limit the bend in your elbow in the back swing.  Learn to keep your wrist flat (no bowing or cupping of the wrist).  And practice your 90 degree wrist hinge for lag in your back-swing.   CLICK HERE  TO Practice and play with GOLFSTR+  for more POWER & CONSISTENT HITS.

Next Week’s Swing Tip:       Halleluiah Moment!   Don’t Freeze up in the Back-Swing

Are You Missing a Key Component for Great Golf?

Why is Tiger Woods back on top of the Race for the FedExCup?  Answer: He works on every aspect that will make him successful: Strategically, Physically and Mentally.

If you are weak in one of these areas you will never reach your goals to improve in this wonderful game.  Why frustrate yourself?  Take inventory of what you are missing and make it happen.  The following points recognize the value of the mental game, core strength, flexibility and balance that you can gain from Yoga  (CLICK reference for the full article: Yoga for Golfers) .

YES, IT CAN HAVE A HUGE IMPACT ON YOU GAME! 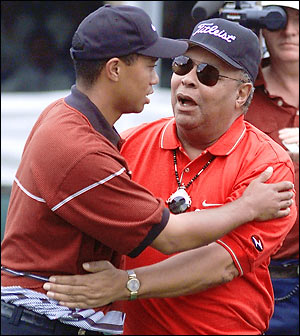 Inspiration for Tiger and all golfers.

Practice with GOFLSTR+ to ingrain success in your mind.  Relax and allow muscle memory and your subconscious mind to give you the confidence to improve every swing in your game.

Watch for next weeks Swing Tip:   GET A GREAT GRIP AND ENJOY YOUR SUCCESS

Relax Like a Boss: This site give you access to blogs that relax your mind.  Yoga gives you mind control, mindfulness, flexibility and strength throughout your body.

Golfers need a change of pace to find peace of mind when they enjoy this wonderful game.  CLICK   to check this out:  YOGA BLOCKS AND GREAT MIND GAMES

GOLFSTR+ …….. For Every Swing in Your GAME

We are excited to announce that Mike Calbot www.GolfDoctorUSA.com, a Professional Golf Swing Analyst and Master Instructor at the Old Corkscrew Golf Club,  (a Jack Nicklaus Signature Course) in Naples, Florida is working with us to expand the use of GOLFSTR.  In the following ad Mike is quoted as saying, ” I’ve added GOLFSTR+ in my training program and recommend it to help in so many ways.”

We now promote GOLFSTR as 5 Training Aids in 1.  It helps you train for EVERY SWING IN YOUR GAME.

We are now re-launching GOLFSTR under the new name of GOLFSTR+.   This half page ad has been released for publication in Golf Tips Magazine and Golf Magazine for a combined circulation of  2 Million subscribers. 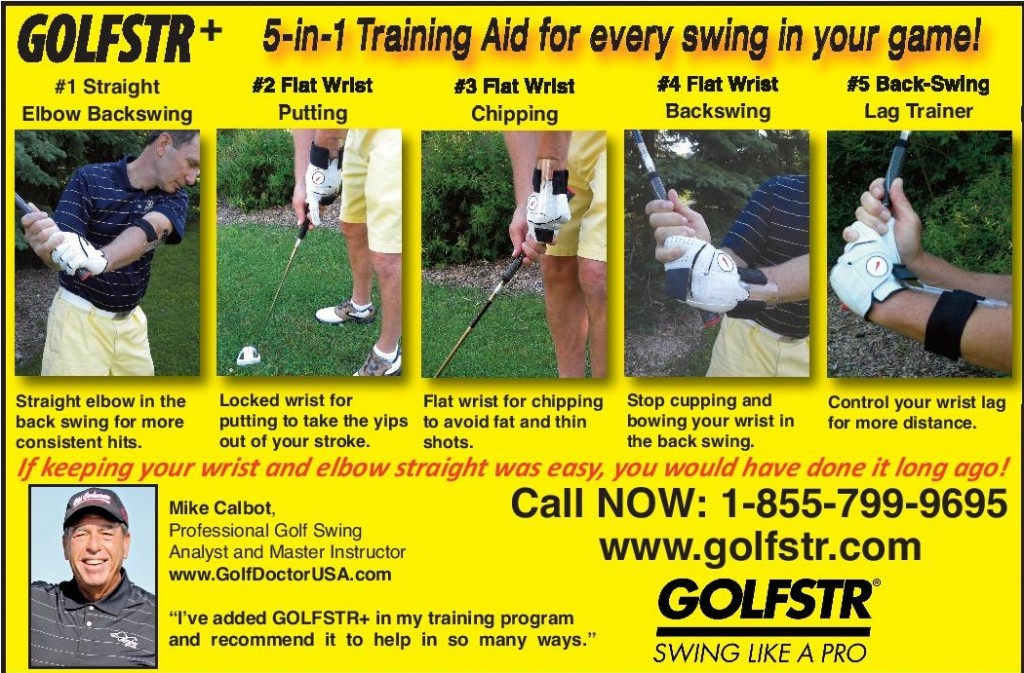 Mike Calbot’s experience, while instructing with GOLFSTR, woke us up to make changes and offer new applications for this successful Golf  Training Aid.

1.  A Black Rubber EXTENDER has been added to provide 3 options for the pressure on the back of your arm when learning the Straight Elbow Back-Swing.

2.  Mike had previously developed a strap-on Wrist Lock to prevent cupping of the wrist when putting and chipping.  He felt that we could apply the same principle to GOLFSTR.  He recommended that we reverse the direction of GOLFSTR and snug it on the wrist over your golf glove to lock your wrist.  We also found it useful in the back-swing as a guide to prevent cupping and bowing on the wrist in the back-swing.

We also developed a 5th application by reversing the arm band and using the plastic plate to work as a stopping point for your wrist hinge in the back-swing.  We call this application the Back-Swing Lag Trainer.

Place your orders now as we expect to be short of stock this Fall.   CLICK TO check out GOLFSTR+ User Guide on our website.

Hope you enjoyed this release and please pass it along to your friends.

Golf News of the Week Worth Noting

Inbee Park won the LPGA US Open, her third straight major this year.  She isn’t tall or strong.  Her drives are not long or the most accurate but she leads in Putts Per Greens Hit in Regulation.  Strange, Tiger and Matt Kucher were also winning when their putting stats improved too.

Her confidence under pressure and choosing the right line are so important but writers for GLOBAL GOLF POST saw more:  “She keeps her putting mechanics simple: low left hand, head still, her hands ahead of the ball through impact.  Every putt is struck with the same rhythm, so effortless that she reminds you of the swaying arm of a grandfather clock.”  TICK – TOCK 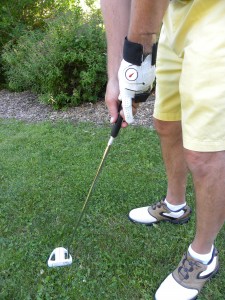 Putt with a locked wrist for a square impact and straight follow through.

Most golfers putt with a conventional grip placing the left hand high.  Inbee’s success is with hitting directly on the intended line and a square putter face at impact.  Light bulbs flashing on!!!  Grip the club any way that works for you.   It’s only the square impact down the intended line that counts.

While practice putting with a locked wrist using GOLFSTR+, I discovered that I no longer “slice” my putts.  Taking any wrist motion out of the putt and finishing along the intended line is so critical.  [By the way, I won a match yesterday on the 18th hole with a critical right to left downhill putt.  It was a pressure putt and I know that my practice with GOLFSTR+ paid off.]

Don’t be an to hit when golfers are in-front of you especially when you are impatiently waiting for golfers to clear the green and surrounding area on a Par 3 Hole.  If you hit somebody and injure them — you are  going to be found liable by a court. 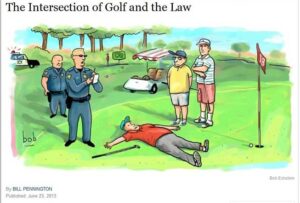 Image from The New York Times warning about your liability if you hit before they clear out ahead.

“The golfer is responsible for making sure that other golfers are out of the way before they hit,” said Robert Lang, a New York-based lawyer who has handled dozens of golf-related cases. “Yes, it’s true they aren’t responsible for hitting someone one or two holes away because they slice a ball, but if you’re on the tee and someone is near the green of the hole you are aiming at and you hit that person, you’re liable.”

In other words, multiple courts have ruled that golfers aren’t accountable for errant shots, but hitting someone in your intended line of fire is not an accident.