More than one way to skin a Cat! – GOLFSTR

More than one way to skin a Cat!

Will Curry November 14th, 2013 YOUR Swing Support Center No Comments

Dustin Johnson has an unorthodox swing but he sure kills the ball.  He hit the longest drive on the PGA Tour in 2011 at 463-yards so he must be doing something right.   Last Sunday he won the World Golf Championship event in Shanghai.  He even got more camera time than his well-endowed fiancé Paulina Gretzky.

Clay Ballard on Rotary Swing Golf showed a great slow motion video of Dustin this week but he ignored his unorthodox take away and a bowed wrist in the back swing.  Could those be his amazing solutions for more power? 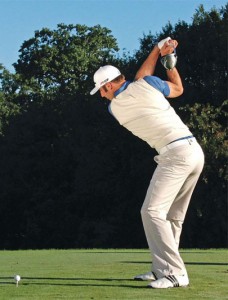 Dustin Johnson with Straight Arm, Straight Shot and a lot of power = distance.

In his takeaway he starts to open his club face immediately.  By the time his club is horizontal the face is perpendicular to the ground and he almost has a 90 degree wrist cock.  This reminds me of a new golfer who wanted to purchase a GOLFSTR.  She couldn’t understand the concept of wrist cocking to create lag.  I asked her to start her swing with her club at 90 degrees to her arm in the horizontal position (similar to Dustin Johnson).  As a beginner hitting over 175 yards within 5 minutes I knew that Dustin was on to something.  You may want to try this a few times if you are having problems creating lag in your swing for more distance (CLICK HERE).

Somehow I think that Dustin’s 6 foot 4 inch height, his extremely straight leading arm throughout the swing, his wrist release and his extreme strength have a lot more to do with the length of his drives.

By the way if you want to work on straight arm and flat wrist in the back swing you should try GOLFSTR+.  Buy it as a Christmas Gift and save $10 by using the Coupon Code: nail it   . Order now on www.golfstr.com