Golf Tips to Think About. PART 1

Will Curry June 10th, 2015 YOUR Swing Support Center No Comments

Rory McIlroy shot an 80 on his first round of the Irish Open. Considering that he shot a 61 a few weeks back at the Wells Fargo, you would think that he would be on his game. Royal County Down, where the Open was played, is just down the road from where he lived for many years and he must have played it over 200 times. His recent result was tragic. Or was it?

External Factors?
Is there something in our body clock or mental framework which we have no control over?   Why is it that Rory and so many and others like Ricky Fowler hit the winning formula on 4 days during one tournament and then they fail to perform on the next? Many have studied the effect of the phase of the moon on crime or barometric pressure causing headaches. Could there be a changing force like solar flares or magnetic fields in bracelets or special metals that purify our brains. All of this is crazy stuff or is it? 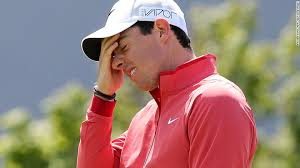 In short, our environment may affect each person differently but when you play the game of golf you need to be mentally focused. Pros that win get their minds in the zone every time they hit a ball. Visualizing the shot; committing to the swing; believing in their ability to make the shot and their ability to block out all external distractions. These seem to be the drives that we need for success. So get your mind TOTALLY on the game when you setup for every swing.

Be Game Ready:
Rory knows the course well and being Irish he wanted to do well, so why did his game let him down. We all ask ourselves this question of our own game more often than not. Where did the magic go? We may never know the real cause but we do know that if his mind and body are not willing, then his score will only go up.

Rory, being the host of the Irish Open, had a lot on him mind. Distractions both on and off the course are the last thing you need on your mind. The pressure to win must also be a major concern. Tiger Woods is another example of a professional golfer who has a lot of distraction and pressure to win (shot an 85, worst round in his life as a pro).  I really hope that it’s not their love life that’s messing up their games.  As a recreational player you may not have as much money on the line as the pros but you certainly have distractions to deal with.  Realizing that they may be destroying your game is a good starting point to clear them out of your head when you play.

Be mentally and physically ready to play: We can only suspect that Rory may have been exhausted or rushed during his warmup on his first day of the Irish Open. He did shoot a 71 on the second day but pressure to do really well can also create mistakes.

BOTTOM LINE: Arrive early to get game ready and be focused on YOUR game.
And of course you should practice with your GOLFSTR+. It’s a great solution to keep your mind and swing sharp. Buy it today on our website: www.golfstr.com