Works for Phil but NOT for You

Works for Phil but NOT for You 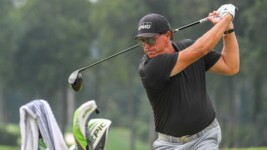 Phil Mickelson has really been playing well on the Champion’s Tour. We all know that Phil has an amazing short game. He learned it with constant practice in his backyard when he was a kid. Practice really is the best way to ingrain the right swing for every club. Your brain needs to remember it and your body needs to feel it. Was it his short game or his long game that helped him win so many recent tournaments?

Phil has one of the longest drives on the senior’s tour, but it is not always straight and not always landing on the fairway or in bounds. During the second round of the Dominion Energy Charity Classic in 2021 he hit 2 tee shots out of bounds on the 547-yard, par-5. That’s two penalty strokes and still on the tee and hitting his 5th stroke. Bernhard Langer won that tournament and became the oldest winner in PGA TOUR of Champions history at 64.

Bernhard and Phil both learned important lessons during that tournament. Bernhard is not the longest driver, but he sure has an amazing approach shot to give himself a chance to sink more birdies.

On the other hand, Phil was 81st in driving accuracy and was well back in that tournament. When Phil was interviewed, he pointed out that he was number 1 in driving distance and his amazing skill in chipping and pitching normally get his out of trouble. On most courses he does not have to worry about driving accuracy as long as he has an open shot at the green to save his game.

Lanny Wadkins was the commentator that day who replied to Phil’s comments: “Life is just much easier from the fairway.”

Aging players are all shorter drivers than Phil so you really need to learn from Bernhard Langer’s approach. Keep the drives in the fairway and give yourself a chance to hit more greens in regulation. I still like Phil’s approach where he can hit it long and always dig an approach shot out of the rough. Practice with GOLFSTR+ to learn to keep your leading arm straight for longer drives. You can also use it to improve your pitching, chipping and putting. Buy one today at www.GOLFSTR.com

GOLFAVENUE BONUS OPPORTUNITY: Click here to trade-in your golf clubs for cash or a credit with 25% bonus value to purchase premium brand clubs or pre-owned clubs.

Golf Truism #89: A ‘gimme’ can best be defined as an agreement between two golfers …neither of whom can putt very well.