The Mystery of Putting – GOLFSTR

The Mystery of Putting

Will Curry July 11th, 2018 YOUR Swing Support Center No Comments

If every green was as smooth and flat as glass, putting would be a bit easier. Unfortunately there are so many variations in the texture of the grass and the ever changing slopes that putting really is a MYSTERY. Reading the changing slopes and feeling the speed of each green is an art form. You have to prepare mentally (calm and relaxed), physically (avoid tightening up) and spiritually (pray for divine intervention) before every putt has a chance to sink.

It’s amazing to see the roll of a ball on TV when a camera is directly lined up from the hole back to the ball. You can see every bounce of the ball as it meanders its way to the hole. Even a slight rise around the edge of some holes (caused by the hole-cutting tool) can deflect your putt. SPEED is the only defense that you have in order to pass over these obstructions so the Number ONE Rule in putting is that you should always putt firm enough to pass the hole by 10 inches.

As a ball slows down its affected more by the slope of the green and any imperfection on the surface of the green. By adding 10 inches of roll on every putt you need to subtract some of the break that you anticipate as the ball slows down. The Mystery of Putting is all about getting a feel for the green. The best putter that I have ever witnessed was an acquaintance who sank every putt at a fair speed. He never let the ball die into the hole. It was a rare day that he had a 3 putt green.

New Rules Allowing the Repair of Greens
In the current rules of golf, you are only allowed to remove loose impediments such as a leaf and you can also repair a ball mark. After December 31, 2018 you will also be allowed to smooth out spike marks (although intelligent recreational players adopted this stupid rule long ago)..

Hidden Depressions on the Green
There are definitely ruts and ball marks which are not visible so I have previously mentioned that speed and momentum of the roll of your ball is the only way to possibly pass these problems. Often we even see that pros on TV use their putter for balance when they retrieve a ball from the hole. Those invisible indents that the putter makes will surely divert many putts all day long.

Rock your shoulders and keep your leading elbow straight and wrist flat.

Sort out the Mysteries of Putting
1/ Direction: Read the green to estimate where you need to target your putt before it makes its major break into the hole as it slows down.
2/ Distance: Practice the swing of your putter to get the feel for the speed of the swing needed to pass the hole by 10 inches. The practice swings will also loosening your swinging muscles.
3/ Muscle Mobility: Putt using a rocking motion of your shoulders. This allows you to use the large muscles in your spine and back instead of the small weaker muscles in your wrist.
4/ Break at the Hole: Your ball will break more as it slows down near the hole. Determine the break along the path of your putt but the final break nearing the hole is most important break to manage.
5/ Greens are Rarely Flat: Decide which way the green is breaking at the hole. If your putt is firm enough to pass the hole by 10 inches, count on less break at the hole.
6/ Arms Swing in an Arc: If you don’t swing by rocking your shoulders, your arms will swing around your body in an arc. For longer putts, you may want to try releasing your trailing hand from your putter at the point of impact and letting your leading hand swing the putter up your target line. This is a great solution if you often pull your putts to the left (for right handed putters). 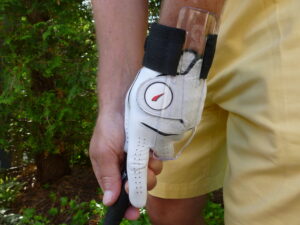 Learn to sink more putts by locking your leading wrist. Practice with GOLFSTR+ to build confidence by rocking your shoulders for control to make more putts.

Practice with your GOLFSTR+ to help you learn to keep your leading wrist flat during the putting stroke. Buy one today at www.golfstr.com