Take the Pressure Off and Play Safe Shots! – GOLFSTR

Take the Pressure Off and Play Safe Shots!

Guys, let’s face it, playing like Tiger Woods is just a pipe dream for recreational golfers. Unfortunately, every time we hit into the rough or behind a tree or take a long shot over a lake, something snaps in our brains. We forget who we are. Instead of saying “what would Tiger do?” we should back off and go for the safe shot to the fairway. Learn to play the game within YOUR capability.

In the Ryder Cup we saw players, like 48 year old Phil Mickelson playing out of his league. Nerves played a big part in his downfall and they affected his 29 year old, first time Ryder Cup partner, Tony Finau. On Day 1, he was so nervous that he missed 2, gimme-range putts. Let this be a lesson to all of us. Nerves can kill our games.

In a golf blog called the Morning Read they reminded us that the total prize money at stake for the Tour Championship was $39 Million. Total prize money for the Ryder Cup was Zero Dollars.  As it turned out the pressure of glory for your country was more pressure for Phil than the money.

Jim Furyk chose Phil as one of Captains picks based on his past performance as an inspirational team leader. Le Golf National Course is a short 7200 yards so he felt that Phil would be avoiding the use of his driver. After all, Phil was ranked 192 out of 193 players in driving accuracy this season. Phil crumbled in the alternate shot format on Day 1 with his playing partner DeChambeau. They were 7 shots behind after shooting 40 on their first nine holes. 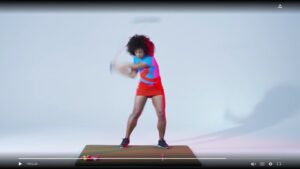 Troy Mullins, long ball champion, uses a loose grip to get rid of her nerves and hold her lag in the downswing.

Nerves play an important part of YOUR game too. Aim for a safe location with reasonable expectations. Get rid of those nerves and hit it like Troy Mullin’s who hit a 402 yard drive to win a national long ball championship. As she says, just “hit it like a girl”. I found her slow takeaway and rhythm in her swing video to be a great inspiration:
1/ Start with loose hands, especially in your trailing hand.
2/ Good body rotation without swaying and with a straight leading arm.
3/ She starts her takeaway similar to Dustin Johnson by starting an early wrist cock.
4/ Let your hips lead your downturn through the ball as you hold your lagging wrists,
5 Load on your leading foot as you impact with your ball.
6/ Just think about your target and swinging through the ball.

Troy’s slow takeaway allows her to keep her swing rhythm as she accelerates through the ball. Check it out in the following video.  Practice with GOLFSTR+ for every swing in your game and buy one today at www.golfstr.com

Check out the Golf Digest 2 minute Video of Troy Mullin’s swing.  We can’t run it from this blog so copy and paste the following link in your browser. https://video.golfdigest.com/watch/troy-mullins-shows-you-how-to-hit-it-like-a-girl