Scoring Well in Golf is a Mind Game! – GOLFSTR

Scoring Well in Golf is a Mind Game!

Will Curry August 9th, 2015 YOUR Swing Support Center No Comments

Do you ever notice that you can play a round of golf and everything goes your way? The drives are great, you hit more greens in regulation and the putts are sinking. On those special days, there is definitely a “force” at work in your brain or body that gives you improved coordination in your golf swing. Unfortunately this happens less often than you would like and it rarely happens for all 18 holes on the same day.

I have been trying to sort out what causes my good days and my bad days. Obviously Tiger lost his Mojo and is trying to get it back before he starts to lose his strength and flexibility as he ages. What happened?

Recently I was playing a round of golf and was shooting 3 over par after 14 holes. At that moment a flash of lightening streaked over our heads so we headed for the club house. After a brief shower and the skies cleared, we headed back out to the course. Unfortunately my game fell apart. I had tree trouble, bad lies in the rough, shanked hits and putts anywhere but in the cup. Was my game messed up by a change in barometric pressure? Not a chance. It had to be my mind and concentration that was messed up.

Major League Baseball and NFL Mind Games
Why is it that over the last 9 years about 54% of all Major League Baseball games played were won by the home team? What is more interesting is the fact that the leading team in each division is winning 67% of their games in their home park. This is consistently better than their away-game record. This means that the winning team is more inspired to play better when their audience is rooting louder for the home team. It also means that the skill of the home team actually improves when they are in a positive mental attitude.

In the NFL the numbers are even more in favour of the home team with 58% of all games played on a home field are won by the home team since 1990. Home audience and inspirational cheering must be a factor helping the winning team win OR causing the losing team to lose focus, panic and make more errors.

Baseball and Football games are definitely influenced by Positive Mental attitude and the teams will to win. Golf is not a team sport. It’s a sport that YOU play against the course. Only you can control the success or failure in your game. Don’t blame the barometric pressure, the wind or the heckling from your playing partners.  It’s a mind game that you play against yourself so use your positive mental attitude and lower your score. 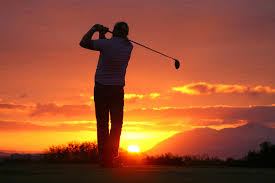 GOLF is wonderful when you are playing in “THE ZONE”.  Only you control your game.  It’s up to you to control your mind to take control to lower your score.

Another way to look at this is that if you can par a hole or birdie a hole on any given day, then why can’t your par or birdie all 18 holes on the same day? What’s stopping you? Right, it’s that grey mass between your ears or as an Aussie friend of mine once called it: That steel plate between your ears.  Relax your mind, enjoy the game, focus on a controlled swing and a picture perfect finish.

Troy Merritt won $1.2 Million at Quicken Loans National with a 4 day total of -18. One week later he is dead last at WGC-Bridgestone at +14 after his second round. Is this the same person?  He has the same skill but a different frame of mind. This proves that your game success is all in your head and that you need to be relaxed and focused in the ZONE.

As Ben Hogan once said: “The most important shot in golf is your next one!”  Clear you mind and make every one of your next shots a perfect swing. Don’t think about the outcome. Focus on your rhythm, inside-to-outside swing and a perfectly balanced finish. Line up your putt and hit the ball exactly on the center of the putting face as you swing straight up your chosen line. Get your swing right and your ball will deliver. NO OTHER THOUGHT IS IMPORTANT WHEN YOU ARE IN THE ZONE.

Make sure that you practice with GOLFSTR+ to create that perfect swing for driving, pitching, chipping and putting. Buy one today on our website: www.golfstr.com .