Almost 90% of us are right handed, for some strange reason.  You develop manual dexterity with one hand at a very early age. Your brain controls your skill to putt a ball with better control for direction and distance with your left or right hand. You really need to discover what works best for your physical and mental make-up. It may surprise you to learn that you have better control with your left hand and a right handed golfer.

The pros are learning to test out their skills with both hands to ensure that they are getting the best result with their mind and body. This listing will give you ideas which you should to try out.

1/ Golf Digest suggests that you test your putting skills from different distances by putting 10 balls with one hand and then 10 balls with the other hand. Surprisingly your dominant hand may not be your best putting hand. After 10 putts at various distances you should be able to tell which hand gives you the best results.  Is your leading hand pulling your putter up the target line or is your trailing hand pushing your putter up the target line?

2/ On the other hand, Phil Mickelson (a lefty) is putting with his right hand high and he has changed his trailing left hand to a “claw grip” (to limit the left hand influence). Phil is actually a right handed person but he golfs with left handed golf clubs. He putts with a left handed putter but lets his right hand control his putts for direction and distance. 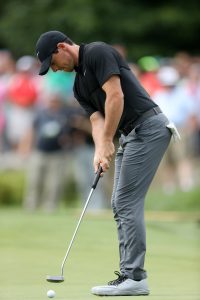 Rory made a slight tweak by holding the grip with both hand parallel.

3/ Justin Spieth uses a right handed putter (and clubs) but he putts with his left hand low to pull his putter up his target line with the left side (the leading side) of his body.

4/ Rory McIlroy just won the 2nd leg of the final FedEx Cup series. He attributes his new success on his improved putting after switching to Henrik Stenson’s putting coach. “He’s trying to get his right side in better sync with the rest of his body.” He also said that he “moved his right hand more on top of the grip.” (*Both palms are now parallel. ) He is right handed so he now feels like he put his right side in control of his putt. His grip is conventional but I can see that he no longer shifts his body up the target line as he finishes his swing. He swings with locked wrists and rocking his shoulders but his putter now swings in the arc of a pendulum WHICH ROLLS THE BALL INSTEAD OF PUSHES THE BALL.

The left image is conventional.  The right image shows a parallel palm grip which is similar to what Rory is doing. It works a lot better with a fat grip.

5/ Score Golf Magazine ran a report by Liam Mucklow, PGA of Canada Teaching Professional of the Year (The Golf Lab).  He found that “a simple way to reduce face rotation in your putting stroke is to grip the club with your hands turned out so your palms face each other. It might look and feel awkward at first, but doing so greatly reduces the ability of your wrists to rotate, which is what causes the putter head to twist. This simple grip change will help you sink more of those should-make putts.”  [It’s similar to Rory’s new grip.]

6/ Brittany Lang won her first major at the 2016 US Open. She said that she was working on two things with her putting: “staying down and fully committing to every putt.” Reading the putt and committing to the line was her success. She works with Dave Stockton, and he’s big on the left hand (for righties with a traditional grip) being the aim hand. So the left hand is super important to me. I like to hit practice putts left-hand-only, isolating the feeling of the left hand in control. My putting grip is left index finger over right pinkie, which gives me the feeling of the back of my left hand going to the hole. Where the left hand goes is where the ball goes.”

Putting is personal as all of these professionals are choosing their personal path. So sort out your controlling hand and let your mind depend on that hand for direction and distance. No matter what path you take you should practice with GOLFSTR+ TO LOCK YOUR LEADING WRIST. Buy one today at www.GOLFSTR.com