Positive Mental Attitude (PMA) is the most important support that you can take with you for any round of golf. Use your memory of great shots in the past. Knowing that you have scored well on a hole in the past will give you the PMA to repeat your performance on all 18 holes. Why not? Just dig back into the archives of your mind and feel that moment. Feel the calm and ease of the swing.  Cease the day!

Learn from your Past Mistakes and Dwell on your PMA for Successes
Dustin Johnson is the perfect example of a player who has had his share of failures down the home stretch. In the past Dustin Johnson was counting his victory before they happened. Now he takes his game one hole at a time. He avoids excitement after each success. 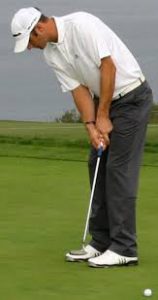 Dustin Johnson uses PMA to visualize his putt so his total focus is on the perfect swing speed, direction and putter face impact.  His head is motionless.

Dustin Johnson proved his renewed PMA at the 2016 U.S. Open, when he was advised that he may or may not be faced with a 2 stroke penalty. He ignored it, played his game and won in spite the distraction. At the BMW Championship, it was more of the same–and Johnson has now established himself as one of the strongest closers on tour. He does it by matching huge power and a single-mindedness that blocks out negative thoughts about what happened earlier in the day–or what could happen ahead.

PMA is Critical for Putting Success
The instant your putter hits the ball is the instant that you have no further control over the success of your putt. So why not put your focus on the direction of your swing and the amount of acceleration. Hitting the ball dead center on the putter face is far more beneficial than looking up and wagging your putter at the ball. Sure it’s nice to see the break if your ball misses the hole but you don’t want to distort your swing by shifting your head too early.

According to Brandel Chamblee, (Golf Channel), “Statistically, Bubba would be the worst putter on the USA Ryder Cup team. He’s almost the worst putter on the PGA Tour (ranking 165). He is the 7th ranked player in the world but he is sliding fast. Bubba Watson has lost his confidence in putting (especially 6 to 8 foot putts). He is self-taught but his PMA in putting is killing his game.

Develop Positive Mental Attitude by practicing without watching the roll of the ball. It’s not easy to make this change. You need to develop the confidence that you are making the right swing to increase your odds of sinking the putt. Start by making the perfect practice swing. Then duplicate that swing and make sure that you keep your head still for a second or two after impact. The pros do it and you should too.

Build PMA by practicing with your GOLFSTR+. You are going to love your new game. Buy one today at www.golfstr.com