Will Curry May 2nd, 2018 YOUR Swing Support Center 1 Comment

I think NOT!  We should all take a lesson from Tiger on things you may want to do or NOT do to be successful in golf. We all know that Tiger was on the edge of beating Jack Nicklaus and every other golfer in most of the important records in golf. Now that it appears that Tiger is back on the right path, let’s take stock of the changes that he had to make to get back on track.

I got on Tigers Band Wagon when he turned 42 in December 2017, about 11 months after his last spinal fusion operation. He placed 9th out of 18 pros participating in the Hero World Challenge. That was pretty amazing but it was miraculous that he had more birdies than anyone of the other competitors. Sure he had some bogies that put him in 9th place but his success proved that he has the skills to drive, chip and putt, just like the good old days. All he has to do is improve his consistency and he will be a winner.

At 59, in 2009, Tom Watson missed winning The Open when he missed 2 shots on the final hole. It was a mental collapse but his success shows us all that a win is always possible when you are older than 30. Sure there have been 8 different winners this year so far and a lot of them are in their 20’s but Tiger is gunning for them.

Rory McIlroy said that it would be the greatest comeback in sports history if Tiger won the Masters. Unfortunately he placed tied for 32. The pressure at that tournament was still beyond Tiger. But there is hope as he can still create miracle shots. He just has to put more of them together. 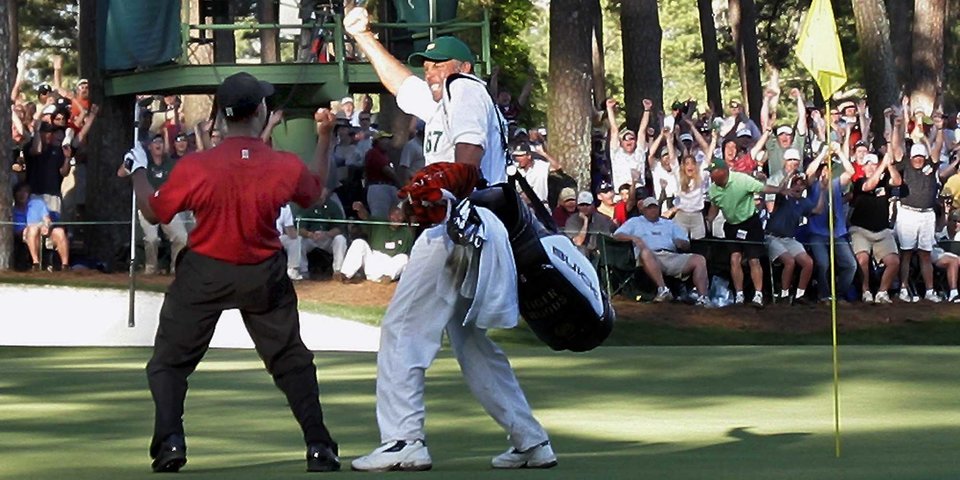 Tiger and Stevie remember so many great shots. This is definitely a Sunday round in his traditional red shirt. (2005 with a chip-in on the 16th at Augusta to win his 4th Masters)

A recent PGA weekly blog by the 2013 PGA National Teacher of the Year, Lou Guzzi stated: “Tiger Woods is excelling with a focus on ‘feel.’ He’s not overthinking. He’s imagining the shot he wants to hit and then he hits it.”

Guzzi mentioned a funny story about one time when the great Bobby Jones was asked what he thought about when he swung a club. Replied Jones: “The last thing that worked.” That is exactly where Tiger needs to be (and what we all need to do).  USE YOUR MIND TO REMEMBER SUCCESS AND THEN DO IT. Keep your focus on the feel for each shot. Remember your great shots and then just duplicate that calm, focused swing.

Tiger knows this. His focus is on the feel for the shot but even more important is the consistency of the shot that he is trying to make. It’s a reminder for all of us to not let our minds take over with a killer swing that will ruin our shots.

Prediction:  Tiger Will Win (if not this week, soon)
Tigers returns to Quail Hollow and the PGA Tour’s Wells Fargo Championship this week in Charlotte, N.C. His last win was on this course in 2007. It was his 57th career victory. The then-31-year-old Woods finished with a 13-under 275, the lowest score in the history of the tournament at that time. I’m expecting at least a top 3 finish this week for Tiger.

Tiger is not over the hill! He and you can control every shot with mental focus and an internal feel for the shot you want to make. Practice with GOLFSTR+ and achieve those same great shots when you take your game to the course. Buy one today at www.golfstr.com

Love to hear your thought and I will report on your reaction (sale@golfstr.com)  or add your comment below.