If a crazy quirk works for you, Just do it!  COVID19 forced me to take a break from golf. In my first round back on the course I learned a few things about my game as a result of my physical limitation. My inspiration started when I watched Rory McIlroy partner with Dustin Johnson in a skins game against Rickie Fowler and Matthew Wolff at Seminole Golf Club, Florida, Why was Wolff using that crazy quirk in his pre-swing motion?

By now every passionate recreational golfer has either seen Wolff in that first live broadcast since the start of Covid19 or winning his first tournament in 2019. He looks like a freak of nature when he incorporates his pre-swing motion into his swing. As he explains it, he is just duplicating the turn of his body that he wants to feel at the point of impact. He just includes that “motion and feeling” instead of a waggle at the start of his swing. It works for him so why not learn from his quirk.

He also includes a major leading heel lift and a huge Furyk type of loop at the top and shallowing of his downswing.   All of this extra motion must have some effect on his consistency which must cause good and bad rounds of golf. 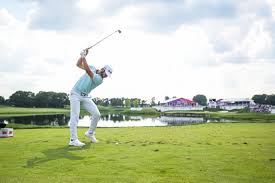 Matthew Wolff adds about 10 moves to his swing that no other golfer tries. It’s mind boggling. Klick image to see the video of his swing.

As it turns out, every professional golfer has their own quirk, even though it may be hidden to the viewers:
-Dustin Johnson: His takeaway has an early wrist break and his transition has a bowed wrist.
-Jim Furyk: He loops his golf club at the top of his swing.
-Bubba Watson: He loves to hit a huge draw or fade on every swing of his club
-Matt Kuchar: His light practice swing is from the outside and across his ball to avoid his duck hook. He also hovers his club behind his ball before he swings.
-Phil Michelson and many golfer love to press their shaft forward to initiate a swing or putt.

I now realized that every golfer that I play with have their own quirks. Some are minor and some are almost hilarious, but they work.  One of the most interesting quirks that I have seen is the closed driver setup stance (for a person who shall remain nameless), where he moves his trailing foot at least 12 inches back from his target line (to create an inside-to-out swing.

This got me thinking. I like to shallow my driver in my downswing but I tend to hit my longest drives up the right side of the fairway (or into the right rough). I must have a physical limitation that is stopping me from driving up the center of the fairway. To fix this, I now open my stance about 10 degrees to the left (as a right handed golfer), shallow my downswing (to swing from the inside or slot) and drive my best drives directly up the center of the fairway with a slight draw. This only works for my driver so it must be my limited strength handling the extra weight and length which was causing my push shots.

I’m sold on my quirk. Practice with your GOLFSTR+ to improve your consistency and incorporate any quirk that improves the consistency of your drives and iron shots. Buy one today at www.GOLFSTR.com

Back to top
mobile desktop