Can You Just Let Go and Make the Shot? – GOLFSTR

Can You Just Let Go and Make the Shot?

Is it reasonable to think that you can just let go and make the shot?   Many articles say that you can but if you don’t have the mental fortitude and proven skill-set, you really need to put a lot more effort into making every shot than “just letting it go”.   I just watched a wonderful video:  PGA Tour 2019 The Nicklaus Method presented by Nationwide. It presented the brilliance of Jack Nicklaus’ game and gave us the clues for success in our golf.

Before I saw this video, I was preparing a blog on how the brain affects our game. The left side of our brain is the analytical side where we may over analyze and mess up our shots. The right side controls our spatial thinking where we visualize our swing shape and direction to hit our target.  So how are we supposed to control our brains to control our bodies to execute the perfect swing for every drive, fairway shot and putt?  During Jack’s Memorial Tournament I was hoping to find the answers from  Jack Nicklaus. 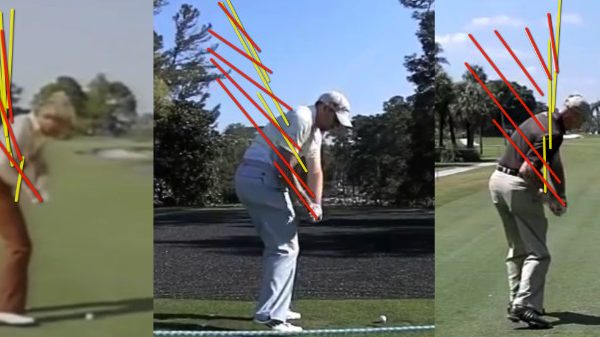 Jack’s straight arm down stroke is dropped to the inside (denoted by the RED lines). You can see his advanced hip turn, lagged wrists with a looped downswing.

Jack developed his golf skills and then developed a mental focus to create his success. During the 1970’s he won 38 of the 171 events that he entered. He won 20% of the time and he was in the top 10 for 65% of those tournaments.  His record proves that his ideas are golden.   Here are some of the key comments which were made by Jack and others on the video:

-Mindfulness: He did not consider the end point. He did not let his success or failure of his last shot district his thoughts on his next shot. His focus was shot to shot.
-Attitude: Be smart about what you do. Take the shot that will generate the best result for you.
-Emotional Control: Refocus on the shot. Be calm and focused with no emotion. Block out problems and decide to just make the shot.
-Posture: You can see his confidence in the way he walked and “the way he carried his shoulders”.

Know your Game: Learn from your mistakes and from your successes. Know what distance you hit with each club and then adjust for the wind, altitude, humidity and ground moisture.

Smart Solid Golf: The pros can take more chances as they have better control of each shot. Mid-range handicap players should accept their weaknesses and make the safe shot with confidence that they can make it. If you hit in a poor location (in the rough or behind trees) take your “penalty” and hit for the perfect position for your next approach shot. Just be happy to find your ball and prepare for your next great shot.

Mental Focus: He knew what he could do with each of his clubs (including his 1 iron) so all he had to focus on was a perfect swing. He blocked everything out of his mind and backed off any hit when he did not have a 100% commitment to his shot or his putt.

You can’t expect to “let go and make the shot”. Even the great Jack Nicklaus used his extreme focus on every shot to block out any mental interference.  Know your ability and focus on the shots that you know you can make. Practice with GOLFSTR+ and put all of your focus on the shot that you remember making before. Buy one today at www.golfstr.com